If You Were Still Here … 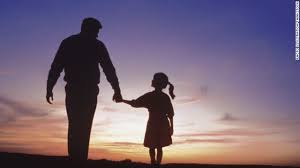 Father’s Day has always been difficult for me.

Dad died aged 35 a couple of months before my 5th birthday, from complications arising from his MS.

I don’t have clear memories of him, just a few snapshots in my mind, but I do remember the day he died.

I waved him off to heaven from a window, still wondering whether the bottle of medicine I had dropped by accident had anything to do with him leaving. I remember feeling desperate rage at whoever had taken him and wouldn’t give him back.

As I grew up, the concept of MS receded into the background; I simply regarded it as an illness  that could make people end up in wheelchairs, like my dad. I studied photographs of him, tracing his life from bright-eyed optimism to darker ones of him slumped in his chair. The difference was shocking and incomprehensible. I filed MS away in my mind.

Every year throughout primary school, the week leading up to Father’s Day was torturous. I would have to tell the teacher I couldn’t make the card, the gift. I was given other projects to do, seething with envy as my classmates spent hours chatting about their dads while they cut out bits of coloured paper.

One year, we had to draw a picture of our family. I don’t know why but I had a sense of overwhelming shame that I couldn’t put my dad at the beginning of the line of people. Instead, I drew my brother standing on a large rock, followed by my mum and then us, in the hope that as the teacher glanced at is, she would assume the figure was my dad.

Throughout my angst-ridden teenage years, my outrage against the whole world at the loss of my dad led me to backpack to Norway for six weeks after my GCSE’s in a bid to trace one line of my dad’s origins. It would take another six years before I accomplished this, but during that trip I felt more connected to my dad than ever before.

As I got older and life opened up, it was the major events that I missed him the most – my wedding day, when I gave birth to his grandchild. I couldn’t help but wonder what he would say, would he be proud of me, what would he look like.

I felt incredible, overpowering sadness that he was born a few decades too early to have access to the treatment I now have. There were no MS nurses, no DMT’s and no real understanding of this illness. It was termed ‘creeping paralysis’ when he was diagnosed back in 1970.

From the stories I hear, my dad was a determined and wilful person, with a vibrant and somewhat unconventional personality. If he was still here, I would love for him to be proud of me and how I live my life despite MS.