Look Back In Anger? 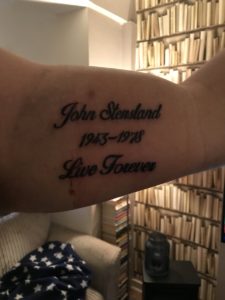 The Teenager had a tattoo on his 18th birthday, and he invited me along.

It felt weird to hold his hand (his grip is pretty strong), and get him through it, just as the midwife had held my hand almost exactly 18 years previously.

He’d thought long and hard and we’d held discussions for well over a year beforehand. Did he know it was a lifelong commitment? The pain? But he was adamant, and I eventually backed him completely.

He wanted his friend’s name and date of birth. And death; he died aged 17 of cancer and The Teenager wanted to symbolically take him along on all his adventures that his friend hadn’t lived to see.

Fast-forward five months and The Teenager (plus a huge bag of laundry) landed back home again for a second tattoo, on the other arm. Same discussions, same concerned parent. But he’d booked an appointment, paid a deposit and came home wrapped in cling film.

The result was a tribute to the grandfather he never knew and my dad, who died aged 35 from complications arising from his MS. I’m still pretty stunned.

I remember being so angry, back when I was first diagnosed, that I would never have the chance to talk to him, to share our experiences. I felt wholly, absolutely, alone. I was four when he died, so I don’t remember much about him, just snapshots, which may or not be constructed through other people’s observations.

Above all, I feel incredibly sad that in less than a generation, things could have been so different for him. I also feel moved beyond words that The Teenager has created a permanent memorial. He had the words ‘Live Forever’ tattooed underneath, a fitting tribute to a man who was apparently so full of life, and a nod to The Teenager’s favourite band.

Before I veer into maudlin territory, I am full of admiration for The Teenager’s determination to rise above the experience of having a mum with MS. He’s been through hell, all through his secondary school education, yet he has come out fighting and is passionate about justice and caring for others.

In short, I am proud.

6 thoughts on “Look Back In Anger?”