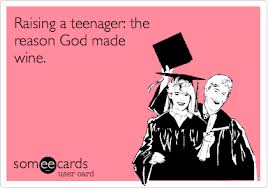 Our little house is in a state of uproar.

To begin with, I trusted The Teenager to go to the hairdresser on his own.

He’s fond of the woman who cuts his hair and he’s partial to the lollipops (meant for the little kids, not six foot 14 year old’s), so I thought I’d leave him to it.

Off he went. Within half an hour, a photo pinged to my phone. A selfie of The Teenager, pretty much bald. And I paid a tenner for the privilege.

Then Parent’s Evening. Or rather, lack of it. After last year’s disaster (a complete and utter bun-fight), I asked him to kindly request that his teachers email me their reports. MS heat intolerance and unsteadiness on my feet make it nigh on impossible to queue-hop and use my elbows effectively.

I waited. And waited. ‘Oi, you’re teachers haven’t emailed me yet.’

‘Oh, computer servers must be down (rolls eyes) you know what it’s like.’

I waited some more.

‘Oh, there’s a terrible bug going round. Like, no one’s in school. Hoooooonestly.’

I called the school. ‘Oh yes, you are the mother of The Teenager?’

I explained what I thought I had organised. ‘Hah! (foolish parent). Anyway, an email was sent out to all the teachers, asking them to get in touch with their thoughts about my son.

Let’s just say it wasn’t pleasant. When he got home from school that day, I brandished a wad of printed off emails at him and demanded answers.

‘All the teachers hate me. S’not my fault.’

‘Why has one teacher said ‘he appreciates the difficulties with regards The Teenager attending after school training?’ You live a couple of hundred metres from the school. What’re you saying??’

Anyway, to cut a fraught story short, I reminded him that I did not spend an entire Sunday putting together a flat-pack desk from Ikea, just for him to put his telly on it. And the lovely little lamp I got him. Or the executive chair.

‘And why are you answering your teachers back?’

‘Dunno. They said I wouldn’t get any qualifications so I asked to see theirs.’

I was a girly swot in school. I have no idea where he gets this attitude from. What annoys me is that he can do it if he puts his mind to it. We had The Discussion. About how he was throwing away his future.

‘I’m not! Alan Sugar started off selling stuff from the back of his car.’. Give me strength.