Is It Time For An Update? 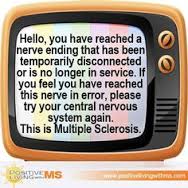 Just out of interest and because I’ve been bored in work recently (sorry, boss), I’ve been asking people what MS conjures up in their minds.

My random and unscientific survey threw up some depressing results; according to my motley panel of vox-poppers, MS is:

It seems MS has a serious image problem.

When I tell them MS is the most common neurological illness in young people and is generally diagnosed between the ages of 20 and 40, they’re astounded and/or disbelieving.

So what’s going on? Is it that we’ve made astonishing progress over the last 30 years, but the image remains the same? Take my dad for example. He was diagnosed at the age of 28 and died at 35 in 1978 from complications arising from his MS. There was no treatment and he was sent home with a walking stick and back then, MS was even referred to as ‘creeping paralysis’.

Five years later, in 1983, the MS Society gave a £1 million research grant for the purchase of the first MRI scanner in the world to be solely dedicated to MS research, changing the way MS is diagnosed.

A decade later, in 1993, the first three MS specialist nursing posts were created. Today, there are 270 MS nurses in the UK. In the same year, interferon beta-1b was the first drug to ever be approved for the treatment of MS. There are currently 10 licensed disease modifying drugs and 8 more are in the pipeline.

Is it simply that MS is mostly an ‘invisible’ illness, only making itself apparent to everyone else at it’s more serious stages? What is the true picture of MS? Is it time to re-brand MS?