20 Comments
By stumbling in flats My Ramblings

A Leek, A Thistle and A Diagnosis 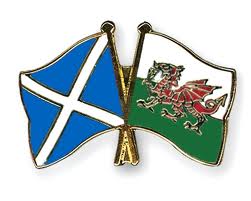 This year we’re toasting the 25th anniversary of our family’s move from Scotland to Wales. Sláinte, Iechyd Da and cheers!

In the summer of 1988, with Bros and Glen Medeiros  riding high in the charts, I played The Proclaimers endlessly on my tape recorder, gulping back tears as I listened to repeated renditions of ‘Letter From America’ whilst  unpacking my boxes.

My Welsh friends now tease me that after all these years, surely I’m more Welsh than Scottish, especially as I now get a lump in my throat when I hear the Welsh national anthem? This got me thinking. Does it really matter if I feel more Welsh than Scottish or vice versa? It’s a bit like MS. Once you’re labelled with it, does it then define who you are?

When I was a pretentious 20-something gadding around Europe, if someone asked me where I was from, I would loftily declare that I was a Citizen of the World. Cringe. I mean, really?

But there’s something in that – I think what it boils down to is a sense of belonging, not labels. When I started my Welsh secondary, once the initial curiosity about me had died down (‘do you have electricity in Scotland?’, ‘why do you sound like an extra from Taggart?’), I found my own place in a group of like-minded people, drawn together by our shared passion for The Cure, Kraftwerk and Doc Martin boots. The nationality label didn’t come in to it.

It’s the same with MS. I’ve lost count of the number of people who say to me, ‘Oh, I know someone with MS, I’ll get you guys together’. Um no, it’s ok thanks. We may be just like any other group of people bound together by a common background, but we all find our own place within that group. Some you get on with, some you don’t.

Like any group though, it has it’s own language. When people with MS get together, they tend to get the basics out the way, i.e. RRMS, diagnosed x years ago, on x treatment. Similarly, when we first moved here, we quickly learned that sannies were called daps, rolls were baps and the Welsh word for carrot is ‘moron’.

What am I trying to say? Just that I may have MS, but I’m much, much more than that label. A Citizen of the World, if you like….

20 thoughts on “A Leek, A Thistle and A Diagnosis”