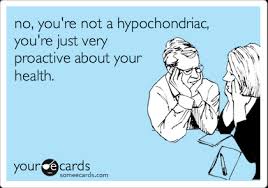 As if having the label of MS slapped on you isn’t bad enough, there’s another sneaky diagnosis that creeps up alongside it.

That of the well-meaning hypochondriac.

I never really worried about my health in those halcyon pre-MS days.

My body did what I told it to do, when I told it to. I had the usual sniffles and aches, just like anyone else. I even used to boast how strong my immune system must be as I rarely took a sick-day off work.

How times have changed. It probably all started after the first Official Relapse. I was urged to keep a symptom diary, noting down anything unusual or out of the ordinary. For the first time in my life, I was closely observing my body. Every single teeny-weeny symptom was duly logged and dated.

At the following appointment with the neurologist, he asked me about any recent symptoms. I took a deep breath and read through my list. Ten minutes later, with the neurologist no doubt planning his grocery list or clocking the cracks in the ceiling, I finished with ‘oh, and my nose sometimes twitches AND my eyelid does too. Weird, huh?’

In short, am I well on my way to becoming a full-blown hypochondriac? Not that I pester the medical staff or take up endless appointments. I am reluctant to ‘bother anyone’. I keep my anxiety to myself. But it’s awfully tiring. Or is that the MS fatigue?

It’s very difficult to differentiate between MS and non-MS symptoms. Some non-MS illnesses are made worse by MS, or at least, not helped. And am I more tired than usual because of work or because of MS? I could tie myself up in knots, if I had the energy.

I think the problem is that a lot of us with MS live with the knowledge that we are only as good as our last relapse. We scan the horizon, waiting for the next bunch of symptoms to ride over the hill.

And speaking of over the hill, I probably need to remind myself that I have indeed reached the milestone age of 40. The age when bits don’t work quite as well as they should. When we nod off in front of the telly. When we get creaky joints.

Must dash (stumble). The tip of my finger has just gone numb, perhaps I’d better jot it down…..

12 thoughts on “A Double Diagnosis?”