Could Someone Rewind This Year Please? 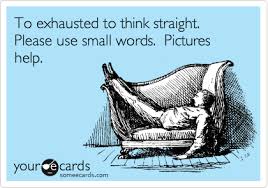 It’s almost May and it might as well be February, as I’ve been in an MS-imposed hibernation since then. All my Grand Plans for 2017 have come to zilch.

This latest relapse has been tough and it’s taken all my diminished strength to get through it.

As always, life shrinks to the absolute bare minimum. It’s a case of getting through the day. The pain has been crippling, the fatigue all-encompassing.

As I emerge from my MS cocoon, it seems the world has moved on. I’m still wearing my Nordic sweaters and ordering ready-made hearty soups from Tesco. I’m watching dark Swedish dramas on telly and wondering where to introduce dramatic black paint into my house. In short, I’m still in Winter-mode when everyone else has dusted off their shorts and barbecues. S’not fair.

If I had the energy, I’d host a pity-party for one, just like I did way back when I was first diagnosed. It’s been an incredibly long relapse compared to the usual three-weekers.

Anyway, enough whingeing. The Teenager and The Cat have been getting on with their lives in the meantime and handily for them both, I’m pretty much always available to speak to as I loll on my sofa trying to maintain a semblance of normality. I’m a captive audience:

As for The Teenager:

Hopefully, I’m turning a relapse corner and I can start playing catch-up on the year which is passing me by in a blur of supreme inactivity. Or maybe I should throw the towel in and start writing my Christmas list …

p.s. I know there’s a spelling mistake on the picture – just too tired to correct it …

18 thoughts on “Could Someone Rewind This Year Please?”