Leaping Into The Unknown 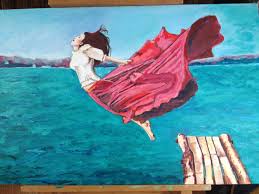 She has now had her UK Sport funding suspended while she takes part in ‘The Jump’, a Channel 4 winter sports programme.

They claim it is ‘due to the nature of the activities in the show’, i.e. ski jumping. Cox later tweeted, ‘B4 judging my decisions ppl should imagine living life as a ticking time bomb. MS has changed my outlook on life, so I’m gonna enjoy skiing.’

Well said, on so many levels, and how short-sighted and discriminatory for UK Sport to judge her decision rather than supporting her as a fantastic role model?

In my own way, although much more small-scale, I know exactly what Kadeena means. All of us with MS have a ticking time bomb and a lot of us want to cram in as much as we can, while we can.

Back in 2011 when MS first made itself known to me in all its hideous colours, it was the shocking obliteration of my mind that spurred me in to action. My very first proper symptom was being unable to speak properly – I was weird enough to have a lesion sitting right on the speech part of my brain, so I started speaking nonsensical English with a German grammar form, fumbling for words and generally having the lights go off, one by one.

For an aspiring writer, it was devastating. I had almost finished my second degree, in the hope of spring-boarding to a great career. Suddenly, I couldn’t string sentences together and essays proved impossible. Luckily I was given amazing support and time extensions and finally gained a 2:1. It was hell, but I did it. MS was not going to beat me.

So what’s the most ridiculous thing I could do next, given the circumstances? Start a blog. Of course. Start writing. Go after that life-long dream, which in my case was way less sports-oriented and more becoming a writer. Why not? That ticking time-bomb.

Even more ridiculously, I signed up for a Master’s in Creative Writing. Lol. It was awful, I nearly withdrew, I got support, and I’m now in the middle of typing up my dissertation.

Kadeena uses the word ‘judging’ and she could not be more right. People do judge you. If you have a disability, you should do exactly what society deems appropriate and if not, you break some unwritten protocol. I’ve been told, ‘what were you banging on about, you got a 2:1?’. Yes, but only after working ten times as hard as I would have pre-MS. I’m stubborn like that.

I’ve been told, ‘You? Take a Master’s?’ Yes. I like to challenge myself, not on the ski slopes, but on paper. It’s been a voyage of self-discovery (i.e. most of my writing is awful, but some of it is good). I’ve been pushed beyond mental endurance and it has been good for me. Horrible at the time, but in retrospect, fantastic.

So could you just stop judging us? Why not get a life instead?