Being Ill Is Fun and Other Myths … 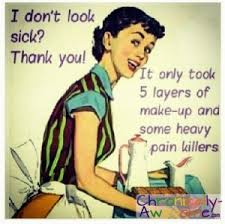 The Boss has toothache.

We were chatting over coffee last week (with him wincing every time he took a sip, bless him) when he said something along the lines of:

I haven’t been too well these last few weeks and it’s scared me; not being able to cook a proper meal, sleeping for so long every afternoon, shooting nerve pains. And that’s without the ever-growing hernia.

But he’s right. Before MS, probably like most workers, I thought a sick day was a euphemism for ‘duvet-day’. I’ve now learned the hard way that sick days are only fun when … you’re fairly healthy.

Real sick days are just that, sick days. You feel dreadful. You wake up tired, knock into everything, trip downstairs, and it’s all downhill from there.

Lying on the sofa isn’t safe, fun or secure when you realise that the only person keeping the whole show on the road is … YOU. There is no one to put the bins out, feed the cat, order shopping, clean, cook.

I’ve lost count of the times I have forfeited dinner, only to starve until The Boss picks me up in the morning with some kind of breakfast waiting for me.

As the only bill-payer in my household, the pressure to recover is immense, so there are no days in bed, no recovery time. It’s a case of getting over the worst and getting back to work.

Which I do, time and time again. Take yesterday: in the van on the way to work, I told The Boss that even though my right arm was numb, I would be fine. I ignored the shooting nerve pains and the general uncomfortable sensations in my fingers.

I got through the day with my left arm. It’s what you do, without that safety net.

The Boss will get his dental treatment. I will keep on taking my medication, and for the foreseeable future, two hour afternoon sleeps will be the norm.