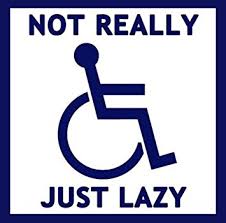 So, when you receive an indefinite award for Disability Living Allowance, you tend to believe them, especially as MS is incurable and degenerative.

As it was for me back in 2012. The money, as stated, went towards the extra costs a disability can bring. And life went on.

We still had a lot less money than before, as my working hours had substantially reduced, but the DLA provided a cushion of sorts.

Until October last year when The Letter arrived. It was entitled, ‘Your Disability Living Allowance is ending’. So it wasn’t ‘indefinite’ after all – ‘this affects you even if your DLA has no end date’.

Imagine the uproar if people receiving the basic State Pension (by far the biggest benefit paid out – for costs associated with being older and probably not working) were suddenly reassessed:

DWP: You’ve been claiming your pension for years. Indefinitely, we say in Government Speak. Subject to change, of course.

DWP: Ah, you see, not all pensioners are the same. Some need more support but most need far less. So we need you to fill out a massive form, gather evidence and put yourself through a degrading assessment where we will decide on the spot whether you are deserving or not.

DWP: And that automatic Winter Fuel Payment you get? You know, the one you have if you were born before 1953? Even if you’re a millionaire? Don’t worry, you get to keep that. Not worth the backlash. It’s only £550 million a year. We normally target disabled people to get some money back in to the coffers. Makes for the most sensational headlines.

Everyone under 65 receiving DLA or PIP for MS will have MS for the rest of their lives. Yet, they are all reassessed. One-third will lose their benefit, according to latest figures. They’ve taken £6 million off us people with MS so far, and counting.

Everyone receiving the State Pension will receive the State Pension for the rest of their lives, no assessment needed. Neither are people on DLA over the age of 65 reassessed. It’s an automatic roll-over on to PIP.

I have absolutely nothing against pensioners, I’m merely using their particular demographic to highlight the gross injustices within the entire DWP system. Here’s the latest figures:

£171 billion spent on all benefits, of which;

£550 million spent on free TV licenses for people over 75

The whole system seems somewhat arbitrary? The assumption is, when you reach pensionable age, you are due benefits, regardless of any other factors.

As for working, which most of us with disabilities try to do as long as possible, 46.5% of us still work. 10% of people with the basic State Pension still work. In fact, we are pushed in to work, no matter what our disabilities. Figures show at least 90 disabled people a month are dying after being found fit to work. Again, imagine the outrage if the demographic group was different?

My face-to-face PIP assessment took place yesterday. I had, after much consultation, filled in the huge form, adding as much information as I possibly could, a brutal and inhumane exercise in its own right. Apparently the one hour the assessor spent with me will count towards the Final Decision the DWP will make – to continue disability payment or not.

We’re told this kind of assessment forms but a small part of the DWP Final Decision. I’ve heard otherwise and I have no idea whether I ‘scored’ enough points (yep, that’s what they do, they score you).

The weird thing is, I am fighting to remain poor, to retain the same benefit between DLA and PIP. Mine is not a new claim. If it wasn’t so tragic, with the possible outcome being so life-altering, I would laugh.