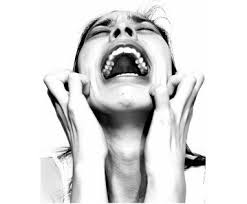 It would appear the dehumanising experience of moving from DLA to PIP begins with that very first phonecall.

I received a second reminder letter in the Dreaded Brown Envelope, urging me to call up to start the whole grinding, hideous, unnecessary process.

So, this afternoon after a truly awful day in work, marred by crippling fatigue (my new nickname – ‘GrumpyPants’) , I called to say, yes, I still have MS (surprise!), and yes, it would be really helpful if I could still be allowed by The State to live on very little money.

My call was taken by someone with a semi-robotic grasp of the English language and I frequently had to ask her to repeat stuff; usually the legally-binding agreements they read out to you, followed by a threatening, ‘Do You Agree?’.

I agreed I could be prosecuted, banged up and no doubt hung, drawn and quartered, should I provide false information. Judging by my interrogator, otherwise known as a Call Handler, this may deem preferable.

She asked if I had one of a list of illnesses, including schizophrenia, dementia, etc. I replied no, I had multiple sclerosis. She took absolutely zero notice. Another list of illnesses. Again, I replied, MS. Nothing.

I interrupted her robot speech to ask how long I would have to fill in the forms. She sighed loudly and told me four weeks from when I got my form, which may be in two weeks, but which would be date-stamped with, well, a date. What date? No answer. Confused? Yep.

She asked if I would get help filling in the form. Er, yes? Of course. Who wouldn’t? I can barely write a shopping list, far less fill out an epic and somewhat tragic story of my life with MS.

She demanded to know who would help me. I replied that some very kind people within the MS Society. Names? No. Why is this relevant?

In the end, we came to some kind of an agreement. She, on behalf of the DWP, would continue to terrorise me until I was pulverised to dust and in return I would write out every single episode of my life in which MS gets in my way, shatters my confidence and generally makes me feel less than sub-human.

Begging bowl at the ready …

8 thoughts on “An Utterly Miserable Phonecall”