But Is It Art? 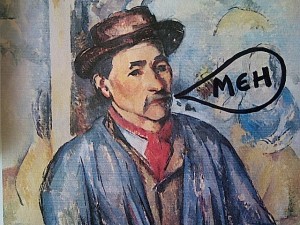 It was a lovely plan – a day spent at the art gallery.

I imagined myself wandering around (artistically), lost in thought, occasionally throwing out deep and insightful comments to my companion in reverential, hushed tones.

He would be impressed by the breadth of my knowledge, adding musings of his own.

Afterwards, we would sit in the cafe and contemplate the wondrous art we had seen over double-shot espressos and hand-crafted scones.

I guess we just weren’t in the mood. We scooted through the galleries, stopping short at odd, randomly-placed sculptures before moving on to the modern art section. We whizzed past each picture:

‘What’s that supposed to be?’

‘The Teenager could do better than that.’

‘Hey, check this out, it’s supposed to represent the dichotomy of suffering in an existential landscape’ (a canvas with two blobs on it).

‘Wow, this guy was pretty radical, he painted the frame too.’

We ended up by the coast and looked out over the sea whilst waiting for the restaurant to open. My friend had a mischievous grin as he started bouncing in the seat of his wheelchair.

‘Shut up, people are looking.’

‘That’s the whole point. They probably think there’s something wrong with me anyway, sitting in a wheelchair. Wanna go on the boat. Boat, boat, boat. ‘

Thankfully, lunch passed without incident and we discussed everything and nothing about living with MS and whether it was acceptable to poke fun at ourselves and our disabilities.

We decided to round off the afternoon with a coffee. Queuing up, that mischievous glint returned to his eye. In a loud voice he announced ‘Aww, you’re the best carer I’ve ever had.’

And no, the ground did not open up and swallow me…