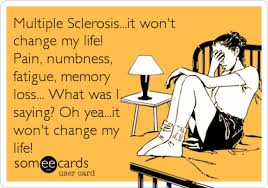 There’s a misconception that MS is somehow pain-free and more of an irritant than anything else.

You know, the stumbling, the dodgy memory, the heat intolerance, the fatigue. In the grand scheme of things, not a bad little illness to have, right?

Sure, we can ‘laugh’ at the stumbling walk, until we trip down the stairs or fall over the in the shower, still clutching our Herbal Essence. We can put up with the joshing about our forgetfulness and fondness for post-it notes. As for the fatigue, well that’s just downright cushy of course. But pain?

Well, over the last month or so I’ve been in a lot of pain. First up was the heat intolerance. People will tell you it’s perfectly simple – just stay out of the sun, pop a hat on and drink lots of water. Why didn’t I think of that? If it were that easy, I would stay in a shady corner until the Christmas goods start appearing in the supermarkets.

So, the heat made me wilt. It pulled the plug on my energy, which was bad enough, but it then began to bring up intense itching, which to my horror, turned into a grotesque rash of blisters. To cut a long story short, after steroids and jumbo-sized bottles of grotty cream, it’s under control but I’m now left with ugly scarring all over my arms. And they still itch at the merest hint of sun, even through clothing. The boss has moved on from nicknaming me Half Shift to Apocalypse Zombie.

So far so bad but worse was to come. I’ve always had neuropathic pain in my legs, feet and arms and my dose of Pregabilin has been steadily increased to cope with it but over the last two weeks it morphed into something truly evil.

Take yesterday. I had a good day at work, got home, sorted The Teenager out (he’s on exam study leave, aka, doss around in bed all day eating toast), and put out the rubbish. Then blam, a whoosh of extreme nerve pain. I lay on the sofa whimpering and it rendered me useless. I tried to lie still, but the pain kept coming in hideous waves, along with intermittent violent twitching in my legs.

Sleep seemed the only answer so I set my alarm and tried to doze off. Only to be awoken by The Teenager crashing downstairs looking for the vacuum cleaner (he’s quite unfamiliar with it). Of course, after being holed up in his room all day, he wants to clean it at 8pm. He bashed every skirting board with the vacuum, sang (badly) at the top of his voice and  shouted to his friends on the X-Box before rushing back downstairs to make some toast.

So the next person who tells me I’ve got off lightly with MS, please excuse me while I trip you up and poke you with a cattle prod.