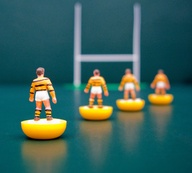 I like The Teenager playing rugby. He won’t mind me saying he was pretty dire to start with, a couple of years ago, but he’s nothing if not determined. Now, he’s got real promise and has offered to buy me a luxury penthouse granny flat if he becomes famous.  Only problem is, I don’t understand the game at all.

Before MS, I would duly stand on the sidelines, muffled in a couple of layers of jumpers, wellie boots on and teeth chattering. I took my cue from the screaming crowd, and cheered along when something happened. Sometimes for the wrong team, but never mind. I schlepped to every game, took him to every training session and washed a pile of muddy clothes twice a week.

We even went ‘on tour’ last year, aka an excuse for the parents to let the kids run wild while we got blind, steaming drunk. So drunk, that I was nominated to go first on the karaoke, where I sang ‘Gold’ atrociously and still got applauded. And we had to wear silly hats all evening.  This was right before my first major relapse and there was an inkling there was something wrong when I went bright red in the face after a leisurely stroll and my legs turned to jelly.

So now, post-MS, the rugby routine is a little different. I still take him training and I still wash his kit but there’s no way I can go to every game. I can’t stand up for long, I’m normally tired beyond belief and my legs get too weak. If there’s an away game, I have to ask for The Teenager to have a lift as I don’t drive too far – my foot cramps up. Which is awkward, as every time I see one of the rugby parents, they scrutinise me closely, look me up and down and say, ‘But you look so…well?’  A code phrase for, ‘lazy cow, any excuse, eh?’

Yesterday, the game was cancelled as the pitch is saturated with rain. Am I unhappy? What do you think……