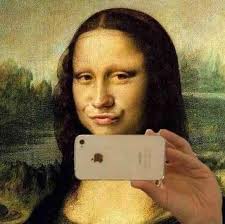 You’d think, wouldn’t you, that what with teenagers uploading photos of everything they do, it would be fairly simple to ask my own Teenager to have his photo taken?

Just one teeny problem with this; the photo would be with me.

Apparently, this is so far beyond the realms of excruciatingly embarrassing as to be virtually unimaginable.

I brought up the subject gently, i.e. I stood guard by the fridge as he crashed through the door after school, shedding bag, blazer and tie in a path of devastation towards the kitchen.

‘Erm, you know how I’m turning the blog into a book?’

‘Well, you’re in the blog quite a lot and I think it would be lovely if we had a photo of both of us? Oi, one bagel, not three.’

He glanced up from the toaster with a look of absolute horror on his face. I guessed this wasn’t going to plan.

‘Here. Go on (wheedling voice), I’m dedicating the book to you. Got a few ideas. And I don’t even mind if you pull a silly face behind my back, like you normally do?’

‘Ok, how about we stand back to back?’

I dropped it. Christmas is just round the corner, maybe we could get someone to take a sneaky photo or ten?

This could quite possibly be the biggest challenge of the entire book project. Not the editing down from several hundred pages of blog posts. Not choosing which font to use or writing an introduction. Or writing a blurb about me (eek) – first or third person?

No, it will be coercing The Teenager into a photograph in less than three takes.

And there was me thinking I could pose with a book, pen (which is strange as I use a computer to write the blog posts, natch) and a slightly melancholy, whimsical look on my face. Perhaps at an angle, with arty shadows. I could even learn how to wear a beret with sophistication and elegance.

Maybe we could have separate photos?

Or maybe I should just hire a cartoonist to sketch us. Could be simpler?

Definitely Not Britain’s Next Top Model 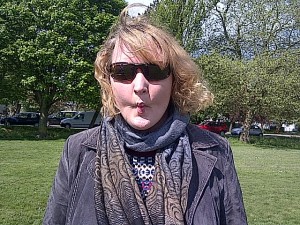 I hate having my photograph taken. I’m always the one at social gatherings who pulls funny faces or hides behind the nearest pillar (see my classic  fish-face, left<-).

So it was a strange experience to be photographed on the steps of the Welsh Assembly building on a sunny Bank Holiday Saturday, being gawped at by hordes of passers-by.

The MS Society is writing up my experiences in work for their magazine and unfortunately they want my mug-shot next to the article. There was no escaping it. The best thing about the day was the photographer, Eiona, a Twitter friend I hadn’t yet met in the real world. The worst thing was my round face. The Teenager doesn’t call me The Chubster for nothing. Personally, I blame the steroids.

Anyway, we had lunch and a natter first plus a cheeky glass of wine to steady the nerves. I badgered  Eiona to pull out every Photoshop trick in the book – make me drop three stone, sculpt some cheekbones, add eyeliner (dodgy hands won’t let me anywhere near the stuff) and generally make me into a passable Kate Moss lookalike.

There was no putting it off any longer. Luckily I only had to stand on the steps, looking into the distance. Thinking serious thoughts (how can I get rid of the slugs in my garden?) I struck a pose. People stared. They were no doubt thinking, ‘who on earth is that chubby-faced woman being photographed – didn’t she play a corpse in Casualty?’

It actually went very well. I had chosen my Sara Lund jumper to wear, hoping to channel some Nordic gloominess and before long. it was a wrap and I was back home, making the most of the peace and quiet as The Teenager was away. After dinner, I noticed my exercise kettlebell staring at me accusingly. It does make a lovely door stop, but maybe I should pick the thing up now and again…