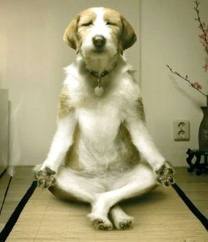 After The Week From Hell, which saw my stress levels catapulted into the stratosphere, I thought it was time to chill out, breathe deeply and relax.

A spot of meditation perhaps?

Call me a skeptic however, but both my ‘journeys’ into meditation have been unmitigated disasters.

The first time, I signed up for a class to impress a new partner. Big mistake.

The session was led by a wild-haired woman dressed in a flowing dress and beads, perched on a dais high above, beaming down upon us lesser mortals. A self-styled guru who had changed her name from Brenda to something vaguely spiritual-sounding.

She promised to share with us the mystical training she had received over the last hundred years and travels through several continents (by donkey). I left after three hours and split up with the partner not long after.

A few years later, I tried again, this time when I was living in Norway. At the introduction session I was told I would be given my very own meditation ‘word’ by another guru, a ruddy, wild-haired man dressed in a flowing silk shirt and beads. The word would be whispered to me and I would use it as a focus to help clear my mind. Unfortunately, the word imparted to me in Norwegian sounded very rude in English and I burst out laughing which was not particularly enlightened of me.

Would I be third time lucky? I already take time out each morning to mentally floss my brain, so how would I fare sitting still with a blank mind? Thanks to MS, that’s actually not particularly hard. My brain is frequently blank, tumbleweed blowing past and I sit down an awful lot anyway.

I read up on it, took ten minutes out and sat in a quiet place. My neighbour started drilling next door, the cat yelled for more food and I heard my post being delivered. But that was ok, I was supposed to listen to the noise, my mind would get bored and would naturally move on.

Then it was all about counting my breathing, so if my mind wandered, I could pull it back in and focus again. After ten minutes, I opened my eyes, glared at the cat and asked myself how I felt.

To be honest, not that bad at all. Will I continue the good work? I’ll try anything three times…