A Sense of Disconnection 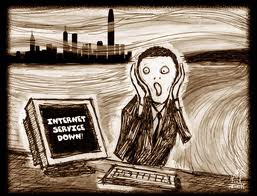 Oh my days. Who knew that being with a much-reduced internet connection over the last week could be quite so traumatic?

The Teenager has gone through a whole range of emotions, from full-blown panic (‘how will I survive? I am utterly, totally disconnected’) to deep depression (‘wake me up when it’s over’).

I helpfully suggested he read a book or I don’t know, make something.

I was smartly told that whilst that may be acceptable for old people like me who went through their teenage years *gasp* without the internet, he’d rather sit in McDonalds like a saddo all day where they at least have free wifi, thank you very much.

Anyway, we’re back on track and a sense of normality has returned to our little cottage (it won’t last). In other news over this quiet week:

While we have been surviving without much internet, my mum (62 years old and a great-grandmother) whizzed ahead of us.

In between Skyping her sister in Scotland, she upgraded her phone from a brick-like Nokia to a Samsung all-singing, all-dancing model. The Teenager is quietly impressed, if a little jealous….

8 thoughts on “A Sense of Disconnection”