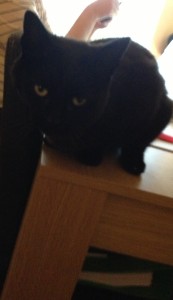 The Teenager and I had a very long chat the other night and we decided to adopt another cat as soon as possible, so I went to Cats Protection yesterday.

He wanted to call the new cat ‘Dog’ or ‘Jam’. At a push, ‘Enchilada’. Hmm. This is the same kid who named my mum’s cat Yoda eight years ago.

Anyway, at the centre there were four long rows of the cutest, saddest cats. Heartbreaking. Half of them were clambering behind the glass, the other half hiding or sitting with their backs turned.

Some of them had sad histories. One had been kicked so badly in the stomach that she had to have an operation. One had lost an eye. Many had been abandoned and some were handed over by owners who could no longer afford to keep them, due to the recession.

I looked around. So many cats, but one stood out. Dora. A dinky little all-black female. Five years old, with a bonkers glint in her eye and I took to her straight away.

Back at reception I handed over my ID, my bank card and my details. I filled in numerous forms, read the small print, promised to take her for her second injection and swore allegiance to Cats Protection. I joked that there was less paperwork when I took my son home from hospital after he was born but that didn’t go down so well.

Dora came through in her basket and we whisked her off to the car. Back home, she has settled in incredibly quickly. When The Teenager came home from school, she jumped straight onto his lap. It feels as if she has been her forever.

Dora could never replace Bubble. She’s her own little character. She seems slightly crazy, but I like that. Having a crazy cat in a crazy world is no bad thing.

p.s. Dora just would not stay still for a second to let me take a proper photo – think she was high on catnip. And we’re going to call her Isadora…