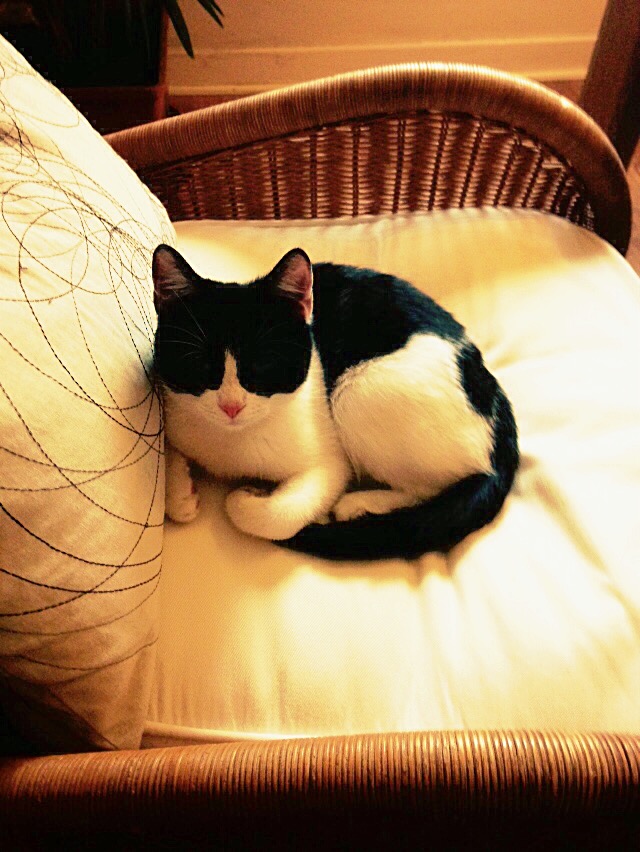 I couldn’t help myself. I was (and still am) deep in mourning after my beloved cat Dora was knocked down and killed recently.

I shouldn’t have looked at the cats seeking their ‘forever home’. Their big, pleading eyes, their sad stories, their heart-wrenching starts in life.

So we now have a new addition to our little family – Brontë. Quick explanation about the somewhat pretentious name: she arrived with the name ‘Bronwen’, and, much as I love Welsh names, it seemed a bit of an odd choice for a tiny kitten, not even six months old.

She wouldn’t answer to my new choice of name, ‘Flump’ nor The Teenager’s, ‘Pancake’ or ‘Dog’. We tried out ‘Batwoman’ and ‘Kerpow’ (check out her Bat Mask), to no avail. So she became ‘Bronnie’ until one evening I called her ‘Bronty’ by mistake and she came trotting over. Result. Being of a literary persuasion (lol), she is now named after one of my favourite authors.

Anyway, she has settled in remarkably well, so well that she enjoys nothing more than scampering up my curtains and sitting on the wooden pole, grinning down at me. She also tears around the house in an endless loop and can make a toy out of anything – she’s smitten with my hair bands and has fished out seventeen of them from a bowl in my bedrooom (I counted) and laid them all on one of my rugs in an impressive pattern and every so often she returns to rearrange them.

In short, she fits in well. She’s also great to snuggle up with when the dreaded mid-afternoon MS crash happens. We mute the telly and radio, choose our blanket and flop onto the sofa.

Plus, she adores The Teenager and he’s in awe of her acrobatics (and her fondness for squatting in my larger plants before I can chase her off), although she is now banned from his bedroom after she stole his expensive headphones.

She may be hard work right now, but I wouldn’t be without her. A bit like The Teenager …