2 Comments
By stumbling in flats Emotions

Not Dressed Up, Nowhere To Go 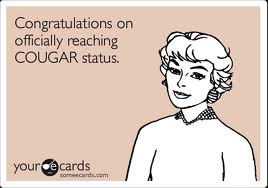 Something disturbing happened the other day.

I was out with a friend, dressed casually, sipping a glass of wine with two hands in one of those faux-bonhomie wine bars with ‘ironic’ artwork and staff with obligatory piercings/sullen expressions/selective deafness. But I digress.

After looking longingly at their heels (sigh), I clocked that their partners were much younger. Nothing wrong with that. After collecting their drinks from the bar, they perched on the chairs next to us, so I couldn’t help but do a nosy.

The men (boys) seemed unable to sit still without squeezing the women every five minutes, in, ahem, not-totally-appropriate places. I’m no prude but this was seriously interrupting my fascinating conversation about my new Gorgonzola and steak recipe and I quickly lost my thread.

So we bar-hopped to the next place. Five minutes later, the same couples came tumbling through the door. To cut a long story short, I found myself in a place surrounded by eerily similar-looking twosomes, like some kind of weird parallel zone. ‘Yell at me if I ever get like that just to get a man when I’m that old’ I remarked smugly, casting my beady eye around the mayhem.

My former friend choked on his drink and said ‘they’re our age, look, that one’s got a ‘Still Flirty At 40’ badge on and that one’s definitely had Botox. They’re all in their 40’s. Like us.’

He was right. I sulked the rest of the evening, lying awake later that night pondering my Sad Single Situation. Is this the only way to date in my 40’s? As if it wasn’t hard enough being divorced with a grumpy Teenager, a rude cat and to top it all, MS, does entering my fifth decade condemn me to a life of body-con crash diets, hair extensions and laughing politely when my date burps the Welsh national anthem?

The only alternative seems to be joining an evening class in the autumn, perhaps signing up to Very Hot Indian Cooking, in the hope that I will find my soulmate over some poppadoms and mango chutney. I reckon the powers that be in adult education should start a brand-new class for ‘peeps who want to meet other peeps but have to pretend to be interested in Very Hot Indian Cooking or Yoga for Complete and Utter Numptys’. Heels and hair extensions preferred, but not essential…..

2 thoughts on “Not Dressed Up, Nowhere To Go”