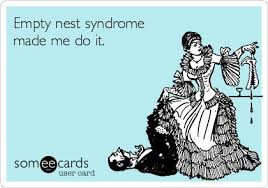 Ok, so I’ve always been fairly sanguine about The Teenager leaving home.

I felt so proud that he was becoming more independent and ready to take the next step in life.

Likewise, I had never felt that as a mother, I’d lost my identity or a sense of who I was underneath the daily child-rearing.

So when I waved him, his tent and an early entry pass off to the Reading Festival on Wednesday morning, I was fine. I went to work. I came home. I tripped over the cat. The usual. I made dinner. Then I burst into tears.

A wave of emotion punched me smack in the solar plexus. This was it. 18 years, done. Finito.

It wasn’t so much the empty house; this has been happening with increasing regularity over the last year. It wasn’t the reduced shopping order I put in with Tesco, devoid of crisps, gallons of milk and cereal bars. It wasn’t even the thought of having a full night’s sleep, without one ear listening out for the key in the front door in the early hours of the morning.

It was simply the realisation that my role in his first 18 years is finished. 18 years as a definitively single parent, the last six of which were clouded with MS, has been the best of times and the worst of times. As it has ended, I can see now that no matter how prepared I think I am, there is without doubt a sense of finality and a period of adjustment.

Perhaps it’s because everything has happened at once – he had his exam results  and University place confirmed on the 17th of August, turned 18 on the 21st and headed off to Reading for five nights on the 23rd. In less than three weeks, I will be dropping him off at University.

I searched ’empty nest’, only to throw up advice aimed at couples – you’ll have time to reconnect! This is about you and your partner now! Make the most of being child-free! In contrast, as a footnote, ‘if you are a single parent, you may feel very depressed (sad face)’. And even worse, ‘if you are the single parent to an only child, you’ll feel doubly bereft (very sad face)’.

Well, no, I don’t. I don’t feel bereft as such. 18 years of doing something, being responsible for another person’s life is a big task. When it ends, there’s bound to be a shock to the system?

Other parents have chuckled when I’ve mentioned it – he won’t be gone for long, watch out for the piles of laundry, you’re always a parent. Yep, and gladly so. We just have to formulate our new relationship – far more hands off and way more being the constant, behind the scenes presence in his life.

Anyway, day three of The Teenager being away and me and the cat are doing just fine. I’m in a new rhythm now and I’m excited about both our futures. Horizons are widening.