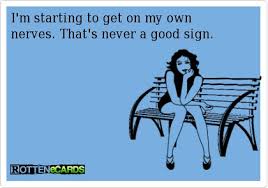 Every late-afternoon, just as the sun begins to set, I have an overwhelming urge to take off all my clothes.

Sadly, this has nothing to do with a new-found interest in naturism or a desire to embrace my post-40 body, flabby bits and all.

I don’t find myself in front of the mirror chanting positive affirmations while gazing deep inside my soul.

It’s much more pedestrian than that – it’s an MS symptom. Mind you, that sounds quite weird so I’ll explain.

For the last two weeks I’ve had the most hideous nerve pain. I’m well-used to this in my legs, my feet and those occasions where it comes and goes in my arms and hands. It’s my constant nemesis. But this time the pain has been cranked up to the level where it hurts to have clothing next to my skin, a bit like a case of very bad sunburn.

Not only that, any kind of pressure is torture, so I spend my evenings alternating between sitting bolt upright on the sofa or wandering around the house like a lost soul, tripping over the cat.

Every morning when the nerve levels are manageable once more I think, ‘gah, must have been imagining it, tsk, silly me’. I get through the day, catch up on university reading (still struggling, still bewildered), attempt to pin-down The Teenager for more than three minutes to find out what he’s been up to (apparently we live in the same house, though you wouldn’t think it).

And just as I begin to relax, start to slough off the challenges of the day, blam, there it is. As if every single nerve ending is a burning needle. I’ve tried billowy t-shirts and baggy sweat-pants, I’ve tried a kaftan (yup, and luckily The Teenager was out that night). I’ve tried slathering myself in moisturiser as some kind of barrier cream but ended up sticking to my clothes.

I’m hoping it’ll pass and doesn’t become a permanent feature of my life. I know I quite fancied myself as a tortured writer, starving in my garret, but this isn’t quite the way I had planned it.