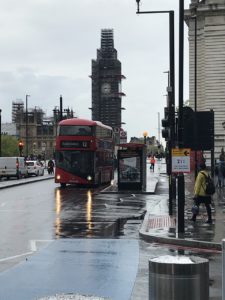 And so it was that me and The Boss travelled to London last week as he was a finalist for ‘Employer of the Year’ at the MS Society Awards.

Seamless train journey, only one small coffee spill and a tiny smudge of raisin from a health bar on my jumper. Result.

We travelled down the night before (after work for The Boss, the day after a day off work for me – I work to the MS-Timetable). The hotel rooms were wonderful, despite the extreme mood-lighting.

In the bathroom, I looked ghostly, in the bedroom, barely there. The plug sockets were in the wrong place but the toiletries were Elemis, so I snaffled them all discreetly in my suitcase and The Boss went out to buy some oddly missing shower gel and shampoo.

On the morning of the ceremony, I filled up on Bircher muesli and boiled eggs. The woman next to me had four slices of cucumber, a radish and one slice of cheese on her plate. She drank a cup of hot water with six slices of lemon in it and I was full of admiration as I slurped my second Americano with milk.

After a post-breakfast shut-eye, I changed into a suitable outfit, aka Definitely Fat but Hopefully Chic-cy. I mussed my wet hair into curls, slapped on the make-up, mussed up the hair some more (if it falls over my face, it hides the chubby cheeks), got my bag, stick and invite and I was … ready.

I cannot begin to convey how incredible the ceremony was. In short, there are so, so many people doing so many astounding things to support the MS community. From bloggers to carers, from campaigners to fundraisers. Every single finalist deserved an award, and it was heartening to see that the children’s categories had all three finalists win in each; there should be no ‘runners-up’ when it comes to children supporting people with MS – they are all champions, despite the horrendous health and social care obstacles they face.

Sadly The Boss didn’t win. It has to be said though, that he was up against major competition and we were loudly cheering the winners. The Boss was happy as he didn’t have to make a speech (he’s awful at saying more than two sentences in a row without promising a new house extension by August).

However, what a brilliant event and fantastic to catch up with old friends and make new ones. I met two of my media idols, Siobhan Nortan and Caroline Wyatt. I also pounced on Mark Lewis, who some of you may remember from his uncompromising documentary about HSCT treatment.

As we left, the rain started. We found shelter across the road and got speaking to a Danish couple. We (being British) apologised for the rain, but they told us they were ecstatic as they knew London was rainy, and it’s what they came for. Weird.

The next morning at breakfast, Cucumber Woman was nowhere to be seen, so I chose a table next to a large-ish couple and ate two bowls of Bircher, two slices of rye bread and some cheese, all washed down with a couple of mugs of coffee and three glasses of cranberry juice.

The rain hammered down, I took a couple of photos and we left the hotel, arriving at Paddington in plenty of time (of course), so much so that we took the earlier train, whereupon I promptly fell asleep.

I may not be back up to speed yet, and took another day off work to recover after the day off to recover, but The Boss understands. After all, that’s why he was a finalist.