Rage Against The Lesion 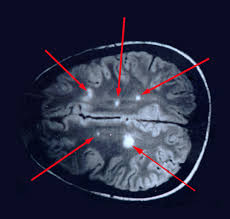 I had a spectacular first ‘proper’ relapse eight years ago and nothing – absolutely nothing – could prepare me for it.

A day trip; a long-planned stroll around shops, and a coffee with a dollop of cream on top with a generous slice of cake in Ye Olde Tea Shoppe afterwards.

The Teenager was away on a rare break, and even though I still had a packet of wet wipes and an emergency box of Lego-themed plasters in my handbag, I was … an adult … for the day.

Or so I thought.

It started on the way there. I couldn’t stop yawning and slumped in the passenger seat, answering my friend with a Danish accent.

We parked up, and I meandered the streets, weaving this way and that, feeling completely spaced out. I floated around with numb, unworking feet and arms, disconnected and, if I’m honest, beyond scared. I fell against walls and tripped over my feet.

I finally found the Ye Olde place we’d agreed to meet at and I sat down, terrified. Something was very, very wrong. The language difficulties increased, as did the sensation of not being of this planet (I know, not that unusual for me, but bear with).

Two days later, I was admitted to hospital with an (eventually diagnosed) unusual lesion on the speech part of my brain. I could have gone in earlier and stayed in for days, but The Teenager was due back within hours and that took complete  precedence over anything and everything. Within a year I had highly-active MS and treatment to match.

Fair play, The Teenager, even after all these years, still does a wicked Danish impression of me. I cannot begin to imagine the impression it left on him at such as young age.

So, lesions. Every day I wake up, I know exactly which ones will come forward and play up. Some are here to stay, the frayed cables permanently snapped – the foot drop, the balance. Some flare under fatigue – the language, the garbled speech, the cog fog. Sometimes they all get together and push me on to the sofa where I spend my days watching clouds drift past my window.

The one I hate the most is the sudden darkness and depression. It descends rapidly – I can be happy one moment and then in the pit of utter despair; I would rather speak with a Danish accent the rest of my life than go through it over and over and over again, a vindictive Groundhog Day I cannot escape from.

In short, it’s awful. It happened just two days ago. That sudden darkness. I’ve tried to learn to just relax in to it – I tell myself it will pass and I will be ok, but it’s so hard.

I know it’s MS and I know it’s a lesion. It’s just a blob asking for attention.

So I try to rage against the lesion. I know what’s happening. But it can take all my diminishing strength to see it pass back in to real life again.

But the bonus? I can still do a wicked Scandi-cop impression …

6 thoughts on “Rage Against The Lesion”