So You Can’t Miss What You’ve Never Known? 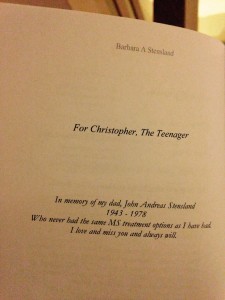 I grew up ‘knowing’ my dad died of MS.

I was guided to a window shortly after his passing and shown him travelling to heaven.

A lot of people get angry when I tell them this  – you don’t die from MS.

There were no MRIs, no disease modifying drugs, nothing.

Technically, he died from a complication arising from his MS; in my mind, he wouldn’t have had this complication at the age of 35, without having MS. Which came first?

So, yes. It was normal to grow up with one parent. I missed him at seminal points in my life and often wondered how he would laugh, how he would hug me, how he would sit down with me and put the world to rights. How he would protect me. I strove to bring the photograph to life to no avail.

When people found out my dad died when I was four, they were sympathetic, of course. And I would reply,

I was adamant. A protective mechanism?

I now stand corrected. You really, really can.

At 37, broken and alone, I missed him more than anything.

Think of the conversations we could have had! I would compare symptoms, speak with someone who understood exactly what I meant by ‘fatigue’, ‘nerve pain’, ‘abject terror’. He would have held my hand and understood.

When I was going through the diagnostic process, I felt closer to that figure in the photograph than never before. Now I knew. Now I had an inkling of what he had gone through.

It was this that made me choose Alemtuzumab as a treatment option – I was going to blast MS with everything my dad never had. Call me sentimental.

On this sentimental strand, I would like to think he would be proud of me and all that I have achieved, despite MS. Sure, I have collapsed, reached rock bottom and felt like there was no tomorrow.

But everything I have done since, whether it is making The Teenager toast or writing a book, it is all with my dad at the back of my mind. According to others, he was intrepid, fearful of nothing.

I would like to think I have picked up where he left off.

8 thoughts on “So You Can’t Miss What You’ve Never Known?”