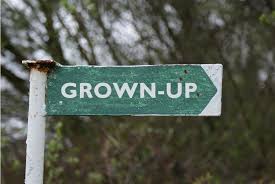 I think it’s when they ask you, in all seriousness, for a spare dish to cook lasagne in (from scratch) to take back to Uni after the Easter holiday .

Or when they finally learn the point of coat-hangers, and how to work the vacuum. They even make their bed, this strange, unfamiliar breed.

The Teenager is twenty this year. It hasn’t sunk in. I’m of course nowhere near old enough to have a child of that age.

It’s been a mixed joy to have him back for the Easter break. My heart lifts when he remembers to lock the front door, then sinks when I come down to a kitchen full of cereal bowls and coffee stains in the morning. If I’m reading in bed at 9pm, he now knocks my bedroom door instead of crashing through it like he used to, before bouncing on my bed, making the cat fly right off.

He remembers to open the bathroom window after a shower and (sometimes) remembers to hang the bath mat back up. He’s airing his bedroom (gasp). Mind you, I did tell him I would hang him outside it from his ankles if he didn’t, as I’ve had it repainted three times. It worked!

In short, he is growing up. He’s understanding real life.

However, there does tend to be some kind of invisible force-field at my front door, which, when he passes through it, he reverts, in some ways, back to a school-age teenager. Take the ‘Actimel Problem’. I buy bunches of them, probiotics, one a day. He takes eight a day. I buy low-carb bread and ham. He eats all the bread and leaves the ham. If he runs out of shampoo, he doesn’t think to replenish from the supply under the sink, he uses my very, very, very treat-worthy products on my shower shelf (we have a shelf each). You see my problem.

Yet in the midst of this transition from Teenager (and we have been through ‘A Lot’) to adult, it’s heartening to see the change in him. He now has a Scandinavian-heritage jawline. He speaks in really grown-up sentences about really important things. We have the most amazing conversations. He is tall, overpowering our tiny cottage with his welcome presence.

When I look back over the last twenty years, I’m stunned that I could have produced such a confidant, happy, well-adjusted human being. It’s astounding in some ways, considering what he’s been through. The abject fear of losing the care of his main parent, his worry for his own MS legacy, given I was a second-generation MS’er. He’s bucked the trend.

After two years of adjusting to a new life in the big, wide world, he is doing just fine. We’ve had our blips, our terrible moments, but thankfully I have been close enough to be there quickly.

I’m always going to be there for him, but for now, I think he’s doing just fine. He’s amazing.

2 thoughts on “When Is A Teenager Not A Teenager?”