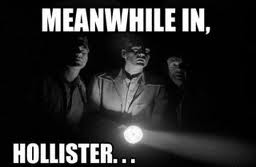 Earlier this week, I spent a frustrating couple of hours in the men’s changing room at Hollister.

There were fumbles, anguished cries and yelling. Yup, I was clothes shopping with The Teenager.

I had laid careful plans and bundled him into the car straight from school, turned on the central locking and hightailed it to town before he could escape.

He’s at that fussy stage (when isn’t he?) – his clothes have to fit just so, the colour has to be just right. Although how he could see anything in Hollister is beyond me. Maybe it’s my age, but it’s pretty darned gloomy in there. And there’s far too many über-handsome staff with chiseled jaws and their underwear on show. Tsk. After rummaging round in the dark and messing up all the lovely neat displays, The Teenager pulled out a couple of shirts to try on.

An hour later (and after profuse apologies to Mr Handsome for all the noise), he emerged from his cubicle and posed before the mirror, turning this way and that, arms flapping.

‘What about the other one? Or that one? Or the one you flung across the room?’

We left empty-handed and repeated the same scenario in the next store. And the next. Normally on trips like this, we have a little family tradition of rounding off the whole drama by taking it in turns to choose a restaurant for dinner. It was my turn. More eye-rolling and dramatic sighs when I told him I wanted to try a nice, eclectic place he hadn’t been to before.

‘My friend said it was a girly place. Wanna go to…’

‘How can a restaurant be girly? It’s dench!’

We sat ourselves down in my choice of place, The Teenager grudgingly admitting it wasn’t that bad and he admired his new rugby socks (our only purchase), before tweeting his friends a picture of them. Then he facebooked a picture of his burger.

We had a lovely meal. Me, The Teenager and his phone. Dench…