Living Alone, With A Cat … 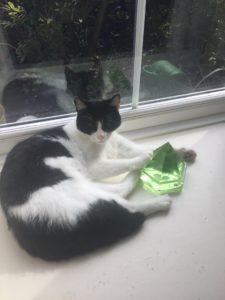 The house is eerily quiet, although the fan in the bathroom is humming in the background, trying to cope with The Teenager’s last, long epic shower this morning.

Spookily quiet, after 18 years of noise, from toy drums and rugby studs on the wooden floor to blasting music on the iPhone.

Hmm. So this is the Empty Nest.

All I can hear is the pesky cat crunching her biscuits.

A couple of hours ago, I took The Teenager and five huge blue Ikea bags to his new flat, at Uni.

A weirdly quiet journey as The Teenager was asleep for most of it with a heavy head cold, only waking with a start when Kasabian came on the radio (‘saw them live’), before nodding off again.

I nudged him awake as we navigated the campus, where I was handed a huge neon sign to put on the dashboard before we drove in circles, guided by people in neon coats. Maybe they reuse all the stuff for the first Fresher’s Party? More neon people greeted us when we finally found his block and strapping students (in neon) helped take his bags up to his flat.

The room was great, and I bustled around, sorting out his stuff (as previously agreed in the ‘What Mums Can and Cannot Do On Drop-Off Day). Towels, shower gel, plates. I held a box up, ‘these (dramatic pause) are washing tablets.’

As it was, he was so tired, all he asked for was his bed to be made up as he wanted to sleep; seems he was totally embracing the student life, right from the get-go. Impressive. More impressive was the huge sign outside the courtyard of blocks – ‘Pizza Delivery Point’.

So I tucked him up in bed, admired the view, and told him I would always be there for him, but would never, ever turn up unannounced. He smiled as best he could and I left him, with a card containing an Amazon voucher and all my love.

The drive home was weird. Getting in the front door was weird. Walking in to the silence was weird. I wandered around the house, clocking his ransacked bedroom, just his prom outfit and a few pairs of shorts left hanging in his wardrobe.

I opened the freezer and sighed when I saw the bags of his favourite chicken. In the fridge, there’s half a carton of his milk left. It all feels … weird.

But yet, taking him to his new place today, feeling the buzz around the campus and watching him take his first step to adult independence, I was bursting with pride. As my mum said on the phone when I got back, ‘it’s not been the easiest of journeys, but he did it. You did it. You must be so, so pleased.’ And she wasn’t talking about the M4 roadworks.

So as The Teenager begins a new phase in his life, so must I.

This is where the adventure starts …