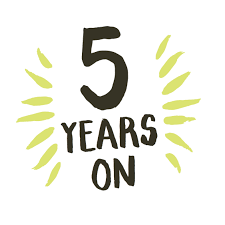 When I was a kid, five years was the difference between mittens with a string through both sleeves and a proper pair of gloves to make snowballs with stones in them (I grew up in Scotland, natch).

Or being in Primary School and Secondary, where you got your head flushed down the toilet on a daily basis.

Now, on the cusp of my five year MS-Versary, it feels … weird. I don’t feel that much older or more informed. I still tug those metaphorical mittens, making sure they’re safely attached.

Perhaps with an illness like MS, with so many new medicines and numerous medical trials, we struggle to find out exactly where we fit in the MS Scale, Bad to Worse.

I remember clearly the night before My Diagnosis. It was Make Or Break. I was going to present my neurologist with every last scrap of evidence (carefully assembled in my MS Notebook of ‘Most Notable and Curious Symptoms’). I was fully armed. After ten months of wandering in the wilderness, experiencing relapse after relapse, I was ready.

As it was, that same neurologist peered at my brain on his computer and said, ‘yes, MS’.

I was stunned, hugged my MS nurse for a very long time, clutched the leaflets she gave me, went downstairs and bought a Boots Meal Deal for lunch.

Now, five years on. I’m much more savvy, sure. I’ve re-adapted a whole lot of things in my life. My main aim upon being diagnosed was to get my son in to University and I’m now mere months away. I’ve almost done it.

However, he’s no longer fooled with my Sofa Command Centre. It scares him when I sleep a lot and I don’t blame him. This last relapse has been a cruel trial at one of the most important junctions of his life.

I’m sanguine now, I think. I hope. Life is easier now I have accepted how much more difficult it is. Which sounds strange, I know. Last week, I thought my epic relapse was over and then, blam, I fell asleep twice in one day. First time was on a site visit. I was in the van, which was a bit awkward -the boss woke me up strapping soil pipes to the roof and I thought I was being attacked by vampire snakes.

I’ve taken to working in our new office, which is lovely as I have coffee on tap and I can play music on the Mac. I create colourful charts and add up scary figures for the boss.

Ultimately, this MS-Versary will be understated. Long gone are the days of my Pity Party For One. I don’t rant and rave. I don’t rail against the injustice. I will only put up one banner, and have two or three party poppers.

I will reflect. On what it is to be human. We will all get sick. Just some of us sooner than others, natch?